The GOP Shutdown of 2013 is officially over. Sixteen days, $24 billion siphoned out of the economy, as well as a slow-down of the economic recovery, record low approval ratings for the Republican Party (lowest in modern history), and the looming threat of default on the national debt finally forced the hand of one of the most ineffective House Speakers in American history, John Boehner. He allowed a vote and got 87 Republicans to join the rest of us in reality to pass the Senate CR, a vote he could and should have held long before the shutdown lasted for over two weeks.

Yep, that’s right…after this fiasco and national embarrassment for Republicans, the majority of the Republican caucus (144) in the House voted to keep 800,000 people furloughed from their jobs, cancer treatments on hold, small businesses from getting vital government loans, women and children impoverished and billions of dollars bleeding out of the economy. That doesn’t even include their fetishistic willingness to breach the debt ceiling – which does not actually increase the deficit – and send the nation’s credibility global economy into free fall and most likely depression.

How has the GOP responded? Well, it’s complicated because the Republican Party is deeply fractured and in catastrophic disarray. Tea Party Republicans, all 144 of them in the House and 18 in the Senate, blamed the President for a shutdown that they literally campaigned on and fought hard to get and maintain. Nutcases like Representative Michele Bachmann have gone so far as to say that President Obama and the Democratically controlled Senate “wanted” the government shutdown. Don’t you see, America? We didn’t shut the government down as a result of our recklessness and extremism – it was all that Kenyan, Marxist’s fault!

As the President and many others have said, they put a gun to the head of country and even the global economy as leverage to defund the Affordable Care Act, a law that passed Congress in 2010, was upheld by the Supreme Court and helped re-elect President Obama in 2012. Here on planet Earth, the ACA is law, is gaining popularity and it isn’t going anywhere. But on unstable Planet Tea Party, elections don’t matter (as they’ve demonstrated by gerrymandering several House districts), health insurance regulations designed to make healthcare more accessible and affordable for several million Americans is just like Nazism and President Obama is just like Hitler…so therefore the government must shut down.

That’s not compromise. That’s extortion. You don’t get to shut down the federal government and send the global economy into depression just because you didn’t get your way in the presidential election or the ruling you wanted from the Supreme Court. You can’t set the country on fire like a band of raving pyromaniacs and prevent fire crews from extinguishing the flames, only to immediately claim you did not, in fact, set the fire.

Eighty-seven conservative Republican members of the House caucus denounced the extremism of the Tea Party and called on their delusional colleagues to see the light, end the shutdown and raise the debt ceiling. Then they voted with their colleagues. Earlier this week when the Senate sent a CR to the House, Speaker Boehner refused to bring it to a vote. So much for bold leadership.

Based on Boehner’s laughably bad job as Speaker and the collective amnesia of Republicans in Washington, we can most likely expect this to repeat again early next year when funding the government and raising the debt ceiling are again issues that will probably bring the United States to its knees. Since 2011, governing via one self-imposed crisis to the next is how we do things. A fourth of the legislative branch thinks it is greater than all three branches combined. But, hey, It’s the American way, right? 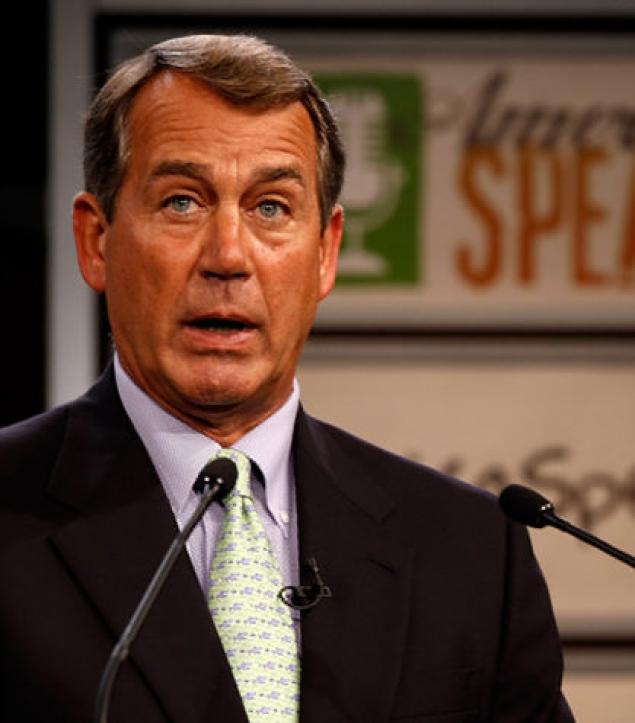 …so about that government shutdown…

Progressive hero and Massachusetts Senator Elizabeth Warren gave an epic speech on the Senate floor a few days ago in which she called out the far-right in the House for its extremism. House Republicans, hijacked by the fringe Tea Party, literally championed a government shutdown and many of them campaigned on it (“If we don’t get our way, we’ll shut it down!”). To them, Elizabeth Warren had this to say:

“When this government reopens, when our markets are safe again, when our scientists can return to their research, when our small businesses can borrow, when our veterans can be respected for their service, when our flu shots resume and our Head Start programs get back to teaching our kids, we will have rejected your views once again.

Here’s a video of the awesome smack-down – it’s a must-watch:

I know that everybody – well, the sane – wants world peace. Regional conflicts, global wars, mass genocide, extremism, terrorism…is there any hope for our insane world? Can global peace be achieved?

As I wrote in the previous post, I strongly believe that extremism and fundamentalism in all religions threatens progress and humanity’s survival. The violent indoctrination that self-proclaimed “prophets” and other religious leaders instill into their manipulated followers is one of the biggest tragedies in the world today. To think that the people who blow up schools and behead journalists do so because they are promised a special fast-track to an afterlife in paradise is horrific and revolting.

I’m not asking for those who earnestly and peaceably follow their faiths to abandon them. Rather, I am hoping that we can reach a point where coexistence is a global reality…a world where religious violence is a horrible thing of the past. No matter what you believe or who you are, we are all deserving of respect and kindness.

Here’s a beautiful video by the amazing Madonna. Performed at her 2006 “Confessions Tour” stop in London, Madonna turned her song “Forbidden Love” into a prayer for peace. Enjoy and think…

On my last post, I expressed my personal view of the supposed “Ground Zero” mosque that has been all over the news recently.

I must correct an embarrassing error: The mosque is actually not on the Ground Zero site itself but a few blocks away. And not only is a mosque planned, but an Islamic cultural center as well.

In the light of this updated information and after giving the issue some more thought, I have to say that my opinion has changed.

Peaceful Muslims are trying to bridge the vast gap  between two different cultures. In a way, they are showing that they are not only sorry for the extremists who murdered thousands of Americans but also very interested in showing a brand of Islam to the American people that is frequently forgotten: A peaceful religion that is able to coexist with Western society.

In the name of peace, I hope that this works. I have nothing but disdain for the violence and brainwashing that fundamentalism and extremism preach…and that goes for all religions. Whenever the Mother Teresas and Benazir Bhuttos of the world speak up and make a difference, progress is made. In order for the world to move forward, the twin demons of extremism and fundamentalism must die out like the dinosaurs.